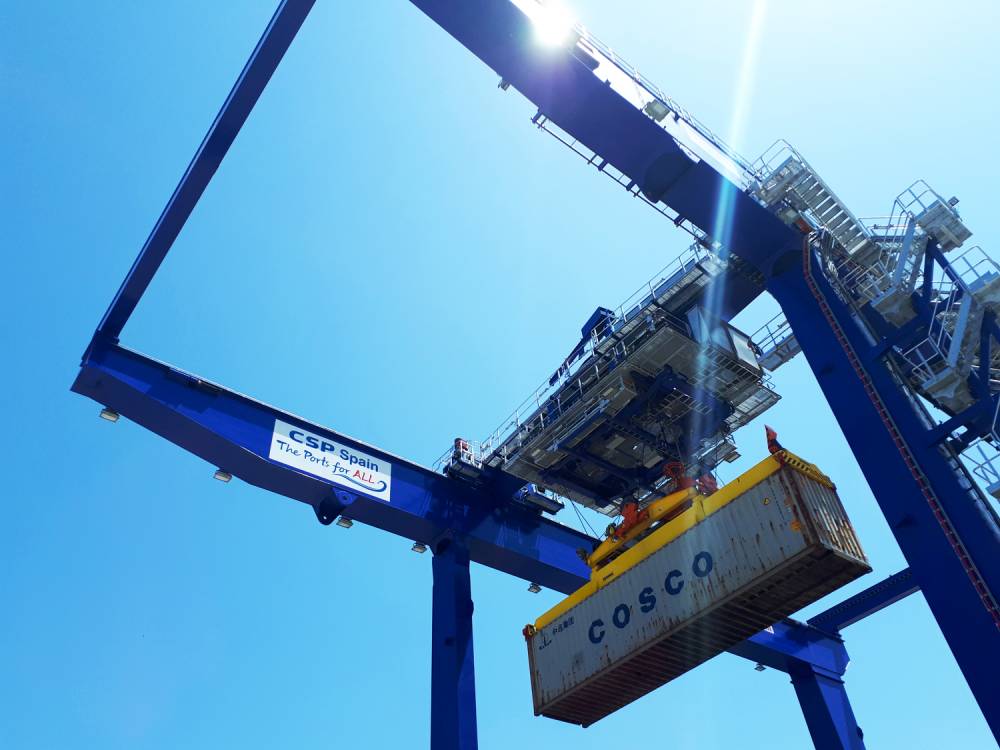 The event was also attended by Mr. Sun Kai, CEO of CSP Spain and Mr. Ricardo Barkala, President of the Port Authority of Bilbao.

The extension of the railway terminal at CSP Iberian Bilbao Terminal represents a strong commitment to the development of the container terminal. The terminal’s four railway tracks have been enlarged by 100 additional meters, allowing for the operation of 550-metre trains. In addition, the railway area has increased from 13,950 to 41,800 sqm through the addition of a new yard exclusively devoted to the railway terminal with a maximum daily capacity of 3,000 TEU.

Following the acquisition of two new, state-of-the-art ARMG (Automatic rubber mounted gantry) cranes, the operative efficiency of the trains will improve by 45%, resulting in an additional capacity of +180,000 TEU in the premises. Furthermore, the terminal has received 4 new Reach Stackers needed to support its railway activities.

With this project, which has involved an investment of over 10 Million Euro, CSP Iberian Bilbao Terminal updates and improves its intermodal capacities. Such capacities are key to develop its most relevant SSS traffic, which will allow the terminal to increase its port railway traffic and promote the integration of the Port of Bilbao in the Atlantic corridor, which will be continued by the Southern Railway Line.

This commitment is supported by the encouraging railway cargo statistics for the first quarter of the year, totalling 3.16 Million tonne input and output: a 26.6% increase as compared to 2018 according to the data collected by the public agency Puertos del Estado.

The best option in the Atlantic area of southern Europe

CSPB is located by the Atlantic Ocean, in the port of Bilbao, which makes it the best option in the Atlantic area of Southern Europe, connecting Spain with the main ports in Northern Europe.

Thanks to its size, strategic soundness, operative capacity and first-class railway area, it is the leading terminal in the North of Spain and the most appropriate location for containerized transport within the Iberian Peninsula and in South-East France.

Located in the north of Spain, it is the best choice in the Atlantic area of Southern Europe for importers and exporters working with the relevant shipping companies. It connects the Iberian Peninsula and South-East France with the main ports in Northern Europe.

Its two berthing lines, 43.8-hectare yard, as well as a modern port railway terminal connecting Bilbao with the rest of the Iberian Peninsula and an automatic gate system for local cargo flows make CSPB a perfect partner on the supply chain.